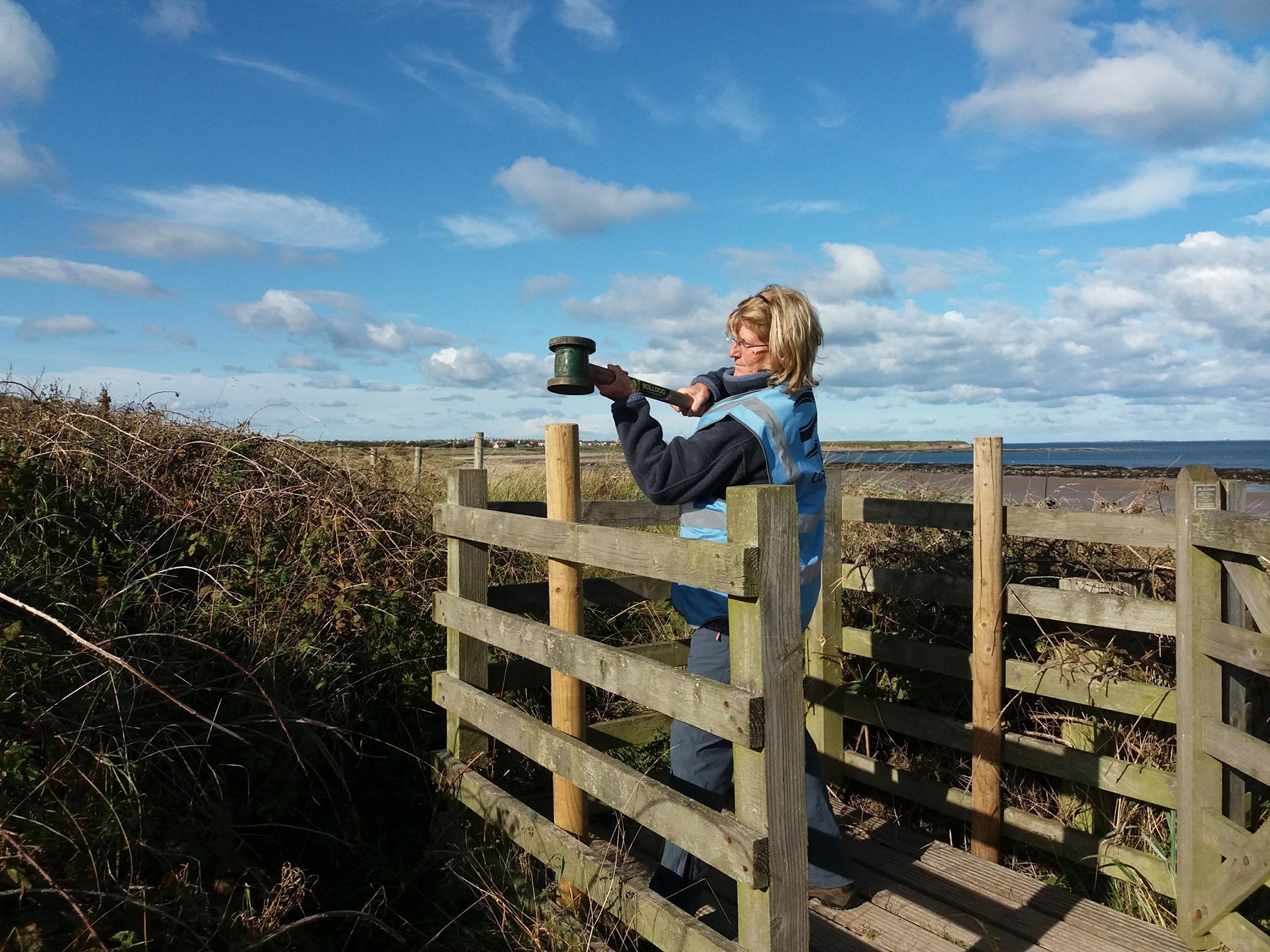 Since we returned from lockdown in July our volunteers have been carrying out many practical conservation tasks throughout the Northumberland Coast Area of Outstanding Natural Beauty.

These tasks are crucial in order to help conserve the natural history of the Northumberland coast.

First we had the opportunity for our volunteers to work alongside one of our partners, Northumberland Wildlife Trust, to improve the access to the beach at their Annstead Dunes reserve. This project would not only make the reserve more accessible for the public to enjoy but would also protect the dunes from erosion and protect the species that call the site home. We made steps through the dunes to create a well-marked, stable path to improve access. Making the path so easy to walk on will hopefully encourage visitors to use it rather than the vulnerable dune system, and so prevent further erosion. A monumental 38 tonnes of hard-core was shifted manually by Coast Care volunteers and Northumberland Wildlife Trust staff – well done everyone! 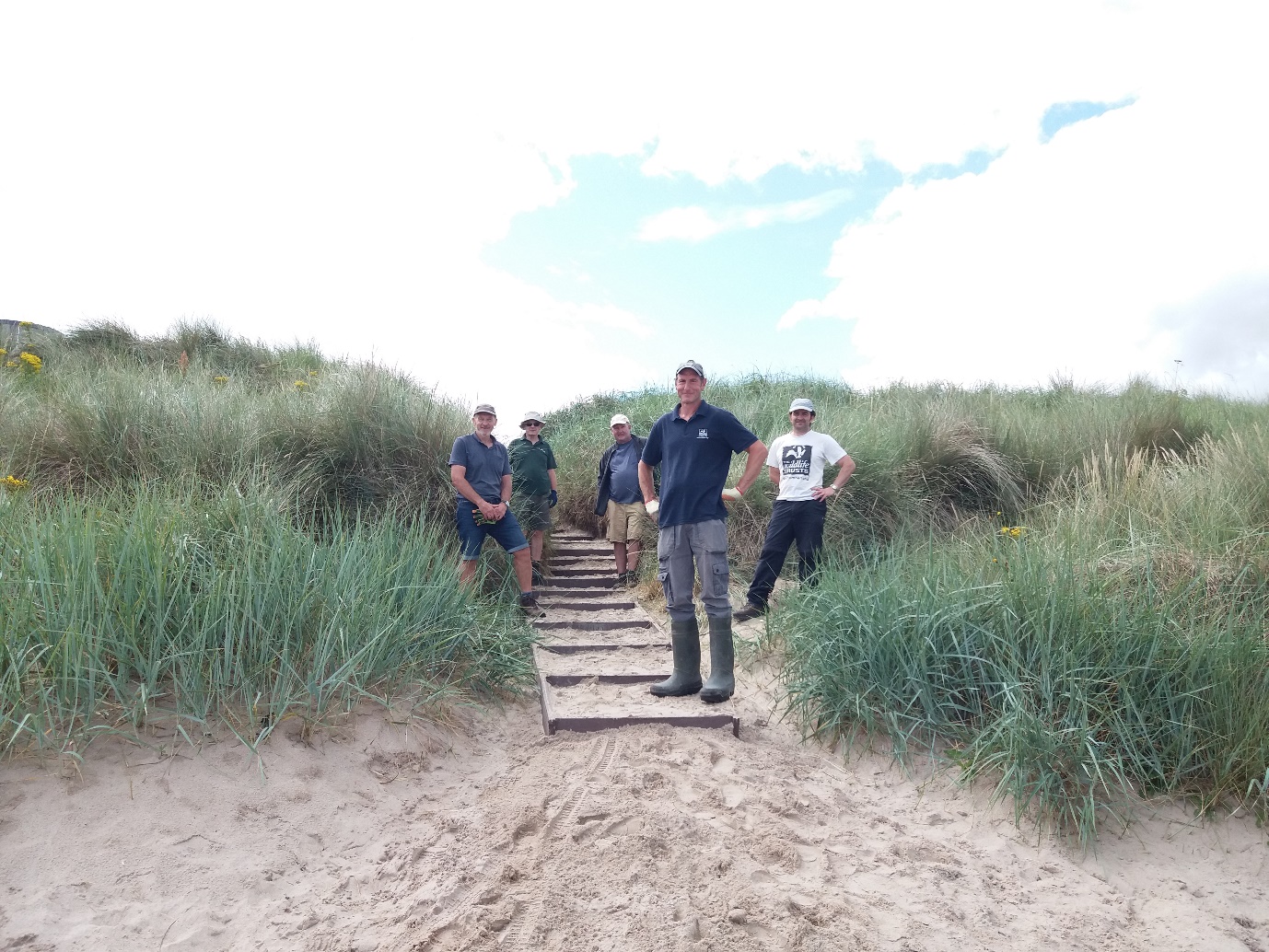 NWT and Coast Care tackled some heavy lifting to improve access to the beach.

Alongside these improvements our volunteers also made some adjustments to the gates on the site to ensure they are suitable for Exmoor ponies, who will be returning to the site as part of a conservation grazing regime to help increase the biodiversity within the reserve.

Coast Care has also been assisting the Lindisfarne Development Trust with implementing the management plan for the Heugh on the island. A Heugh is an old Scottish and Northumbrian term to describe a crag or a steep rocky outcrop. The one on Lindisfarne requires management in order to help conserve its biodiversity, and also some of the historic monuments which are present.

The majority of the Heugh is made up of Whin Grassland which is a vital habitat to many important species. In order to maintain this important habitat, management must be carried out. Our volunteers have been a big part of this management, preventing dominant species from taking over and so protecting the biodiversity of the site. They’ve been doing an incredible job of removing encroaching Blackthorn and Ivy from the Heugh. We aren’t trying to eliminate these species completely as they are native and are of importance to wildlife. However, it is important that they don’t take over the area, so they need to be controlled to allow room for other, rarer Whin grassland species.

This clearance work is also helping the conservation of the monuments on the Heugh for future generations, and to allow visitors to see them properly. Creating more space has also reduced the pressure from tourism by giving visitors a bit more room to roam, lessening the erosion of the existing pathways.

Before lockdown some of our wonderful volunteers received professional training, and were working on repairing a drystone wall which runs from Craster tower down to the village itself. This has been carrying on since we returned from lockdown and good progress is being made. This not only helps to keep vital heritage skills alive but is also supporting the local community to look after their area. 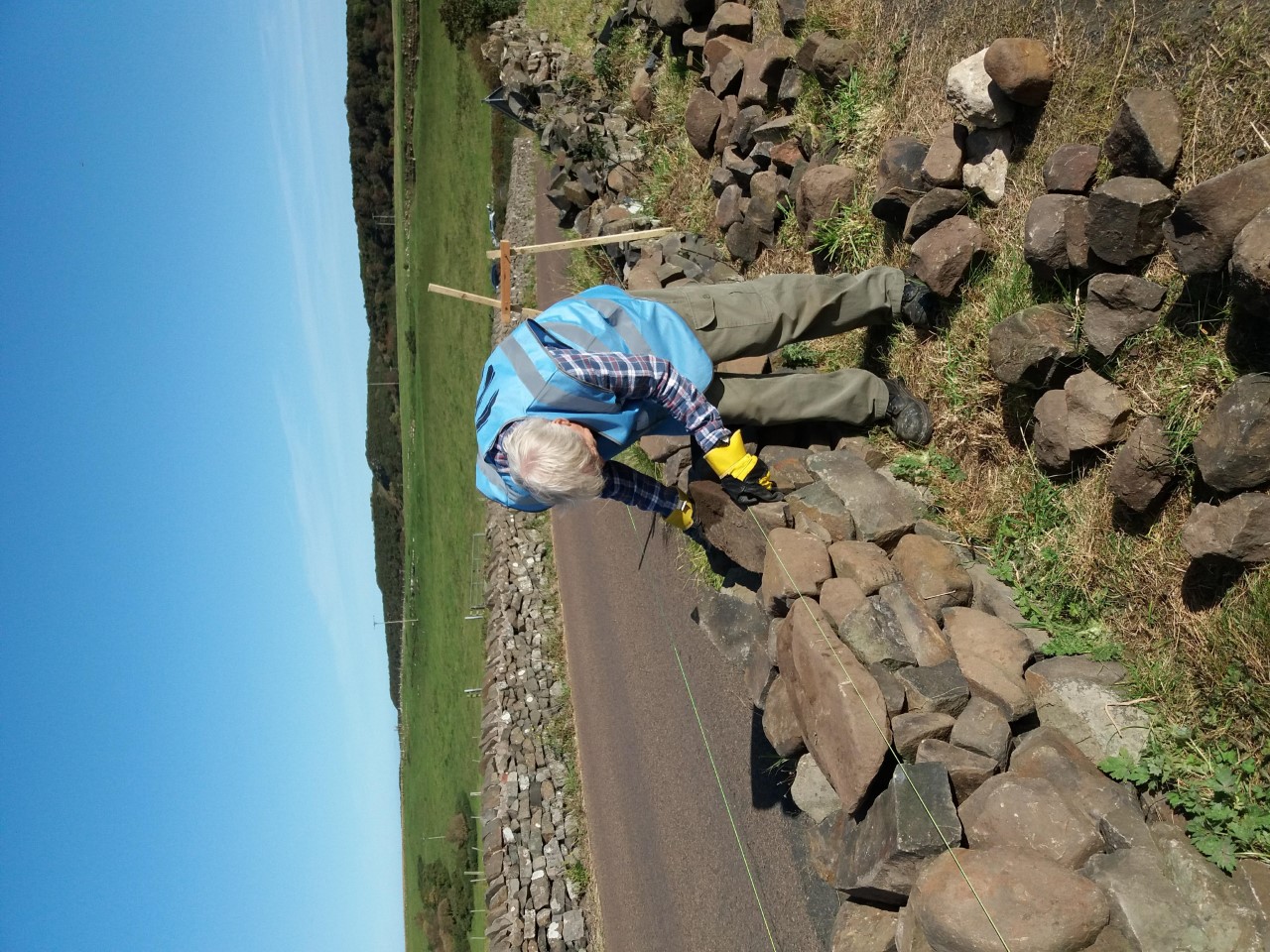 Making sure the wall is straight at Craster.

The Coast Care team have been spending a lot of time helping to manage the variety of habitats at Embleton Quarry Nature Reserve, to help it reach its full potential. We have been working hard to clear paths through thick bramble. This will open up the reserve and help to create a mosaic of habitats. This is a great way to allow a small site like Embleton to benefit a greater variety of wildlife.

We also have volunteers who are trained in traditional scything techniques, who have been out scything back areas swamped by grasses to provide space for a range of wildflowers. Again, it is fantastic to keep these heritage skills alive. Scything is also much more friendly to small animals such as rodents or amphibians than modern tools as it allows them to escape if they need to.

Other volunteers have been removing invasive species such as Pirri-Pirri Bur, which is problematic throughout the Northumberland coast, and garden escapees such as Himalayan Cotoneaster and Montbretia. As well as the invasive plants at Embleton Quarry, we are constantly battling against other invasive species along the Northumberland Coast AONB. Two of the most problematic ones in which we have been dealing with include that of Himalayan Balsam and Pirri Pirri Bur. 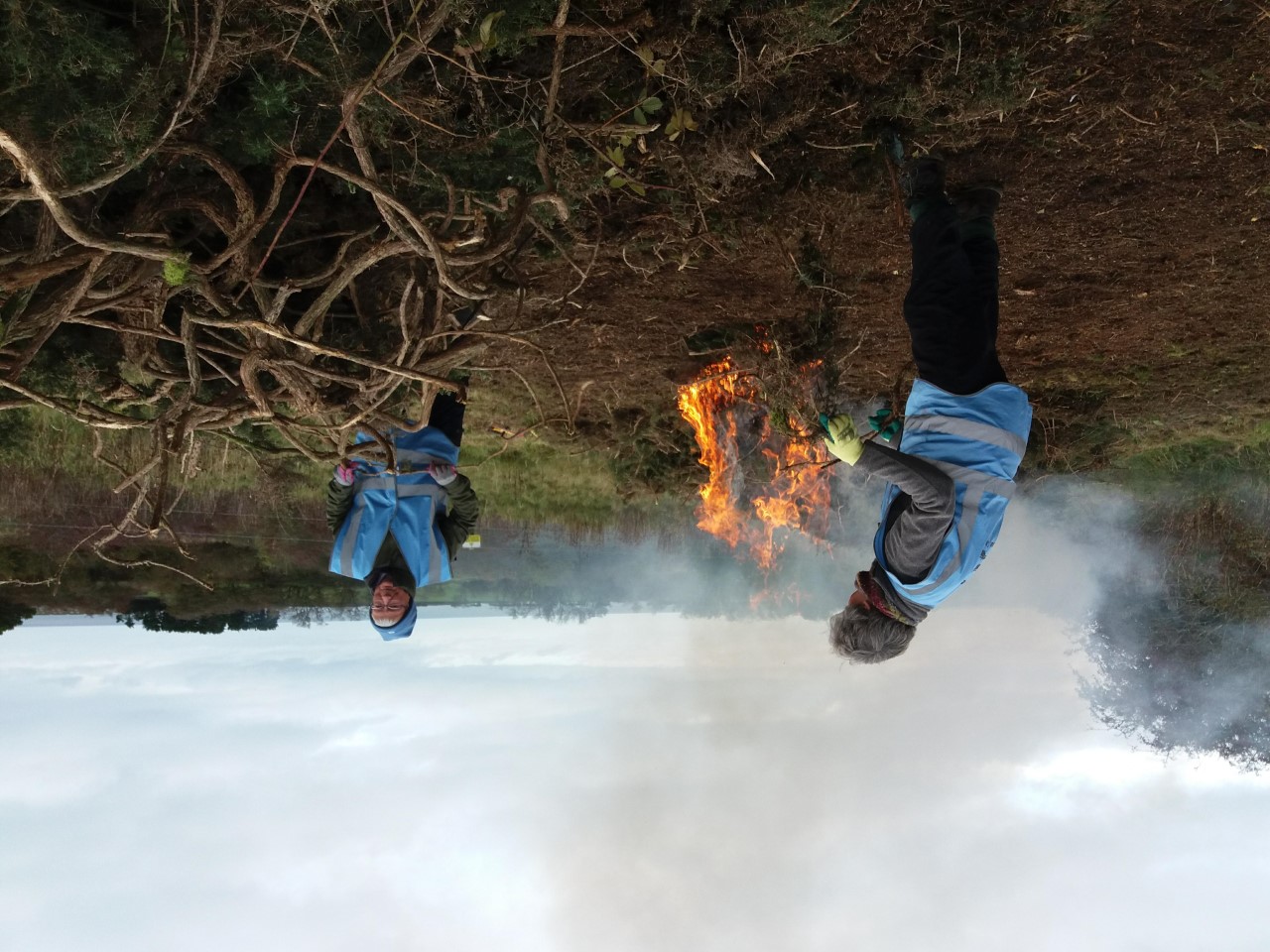 Burning is often the best way to remove cut vegetation, and is great for morale too!

Yet another project that our volunteers have been involved with is to build a number of Barn Owl boxes, which have been put up throughout the Northumberland Coast AONB and are being monitored by a local expert. Although this was a relatively small task it was most definitely an important one. Due to destruction of their habitat, more and more of our Barn Owls are dependent on these boxes for a safe place to raise their young, so by making boxes we are able to help counteract this threat to barn owls.

There have been other small, one-off tasks that our volunteers have been turning their hands too. One such session focused on the repair and maintenance of parking barriers at Cocklawburn beach. Another was to strim back vegetation at the lay by at Budle bay, making it safer for drivers and pedestrians. These small tasks all add to the mammoth effort that it takes to keep the AONB at its best. 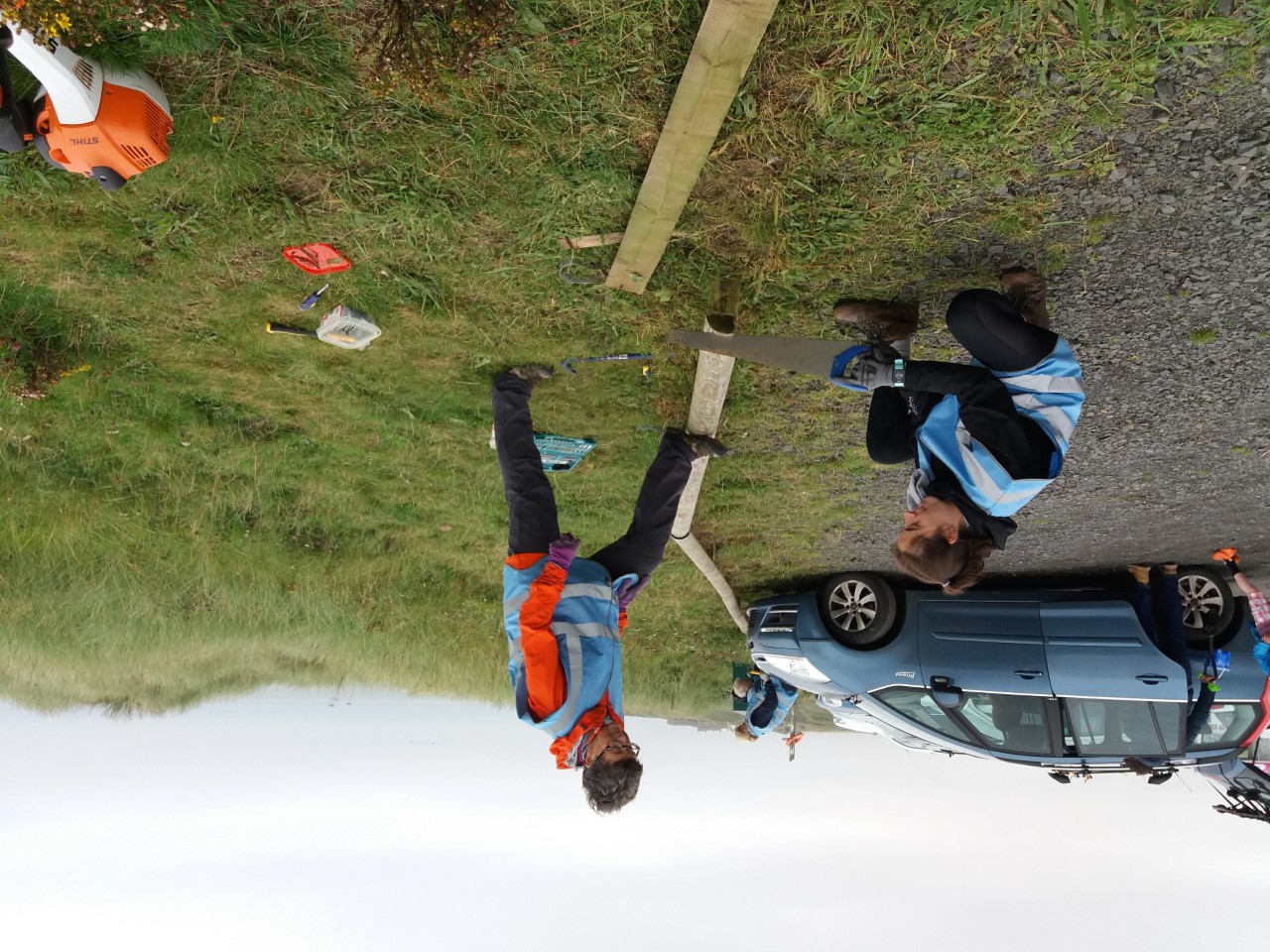 Volunteers getting to work in the car park.

Furthermore, in order to carry out all of these tasks, training is essential. This includes training by professionals in their field which gives our volunteers a certification as well as their newly attained knowledge and skills. Since lockdown we have been able to train more of our volunteers in the safe use of Brushcutters, manual handling and safe working at heights, as well as to lead groups of other volunteers in certain tasks. Upskilling our volunteers in this way allows them to be more involved in the protection of the AONB. Providing opportunities to develop their skills is a fantastic way to invest in local people and give them something which they can also take away and apply elsewhere in their communities and domestic situations.

It has been a pretty wild ride since lockdown, but as always our volunteers have been managed to deliver so much given the circumstances we’ve all found ourselves in. We at Coast Care are grateful for their hard work and dedication, which has allowed us to achieve so much in these fraught times.