Pirri Pirri or to give it it’s scientific name Acaena novae-zelandiae is a prickly problem on the Northumberland coast.

Pirri Pirri is a plant species native to New Zealand and Australia, where it is known as bidgee-widgee. It was first recorded in the UK in 1901 and was most-likely introduced here on the fleeces of sheep imported from New Zealand. In Northumberland it would have been imported into the port at Berwick and the seeds washed from the fleeces made their way to Lindisfarne where it was first recorded growing and where it is still problematical today. 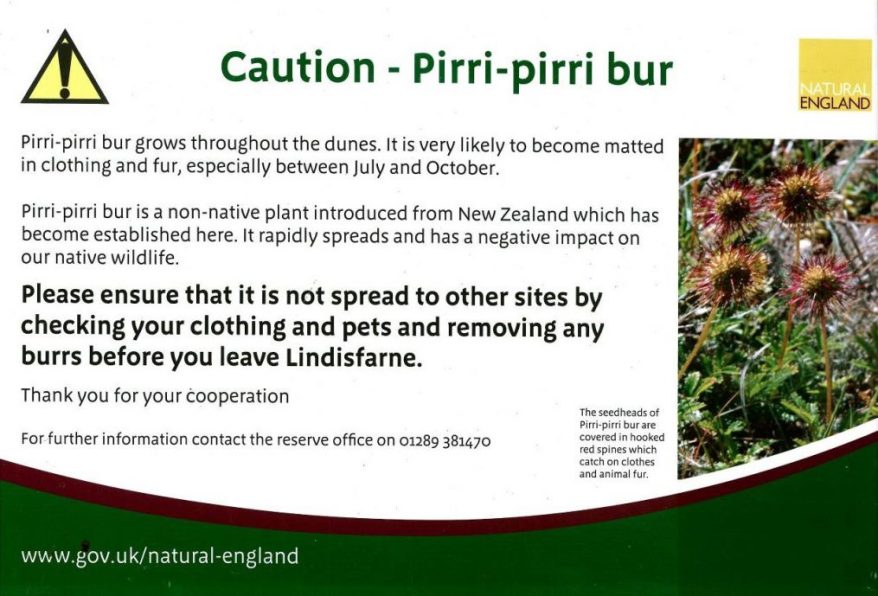 Pirri Pirri is a small shrubby plant that forms dense mats which often results in the loss of native plants where it grows. It produces balls of reddish flowers in late spring which ripen into red, barbed fruits, called burrs which turn brown during the summer. It is these burrs which cause the prickly problem.

The barbed burrs detach from the plant in mid to late summer onto anything that passes – boot laces, socks, dogs and livestock.

Every year, visitors to the Lindisfarne National Nature Reserve have to remove burrs from their dogs, sometimes they are so badly matted that the dog has to be shaved by a vet. Birdwatchers on Holy Island regularly report migrant thrushes, which feed on the ground where the plant grows, so covered in burrs that they are unable to fly.

It is these sticky burs, which has enabled to the plant to spread from Lindisfarne to every corner of the county. Wherever tourist go, you’ll find Piri Piri – from the flanks of Cheviot and the Simonside Hills to Hadrian’s Wall, it was even recently discovered on Inner Farne and was promptly removed by the rangers. It thrives on disturbed ground and can be found along forestry tracks throughout Northumberland.

People can help prevent the further spread of Pirri Pirri by keeping to the main paths through the dunes between June and November. Visitors should also check their shoes, clothing and dogs for seeds, removing them and putting them into a bin. 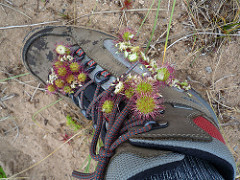 Control of Pirri Pirri is expensive and time-consuming. Hand digging and pulling of pioneer clumps can be effective but is laborious. Chemical control has been trialed but on the Northumberland coast, Pirri Pirri grows where many other rare plants do, making chemical control difficult.

Coast Care are working with Natural England to create an interactive App (compatible with Android and Apple) which will enable volunteers to identify and locate areas of Pirri Pirri along the coastal path network. This survey work will feed back in to the Environmental Records Information Centre North East (ERIC) and will be integral to Coast Care's work to tackle this invasive species and prevent it spreading further to other sites. Following the completion of this survey work Coast Care will also be working to remove the Pirri Pirri from the sites identified.

Iain Robson, Access and Natural Environment Officer, Northumberland Coast of Outstanding Natural Beauty Partnership and Paul Stevens, ERIC North East Coordinator will be leading this training session to explain the reasoning behind the project and train volunteers to use the App to successfully survey.The training will be held at Seahouses Hub, Seahouses, NE68 7YL on the  21st March 3-4pm.

This work will be ideal for our Footpath Monitors and Site Wardens but open to all, so if you are interested in attending and being involved in this innovative project then please book a place by emailing the team: info@coast-care-co.uk

Volunteers will be required to have access to a phone to download this App and use while out surveying.