The Farne Islands Trip That Never Was 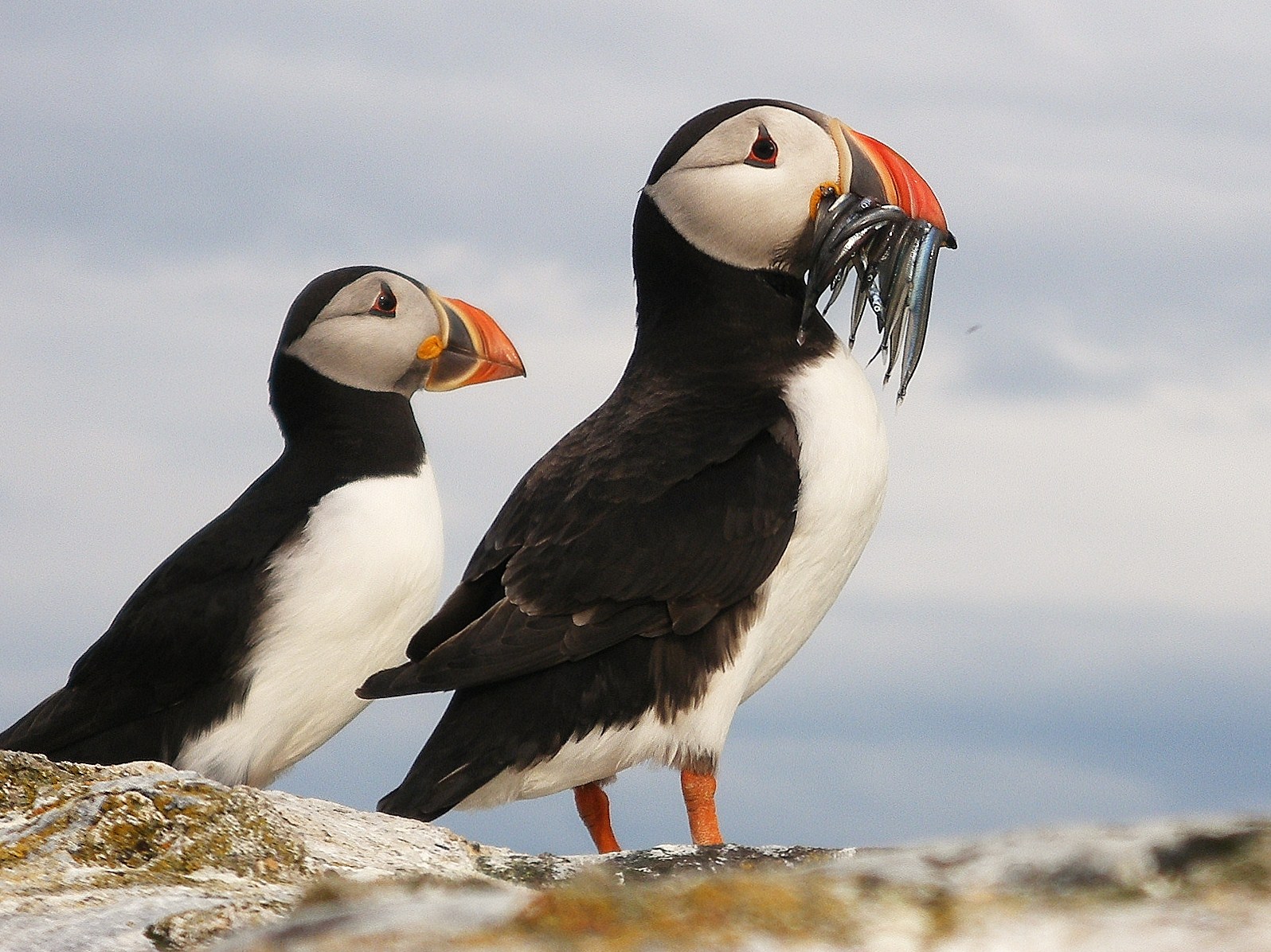 Today 40 of our most dedicated volunteers were due to set sail from Seahouses Harbour for a socially distanced trip around the Farne Islands as our way of thanking them for the time they give to Coast Care.

With the tightening of Covid-19 restrictions though, we had to cancel the trip. This was really disappointing but we have to put everyone’s safety at the forefront, especially at the moment. As the tame ex-Farnes Ranger on the team, I thought I still might be able to bring a little of the magic of the Farnes to life with a blog. It pales in comparison to the sights, smells and sounds of the real thing, but here goes… 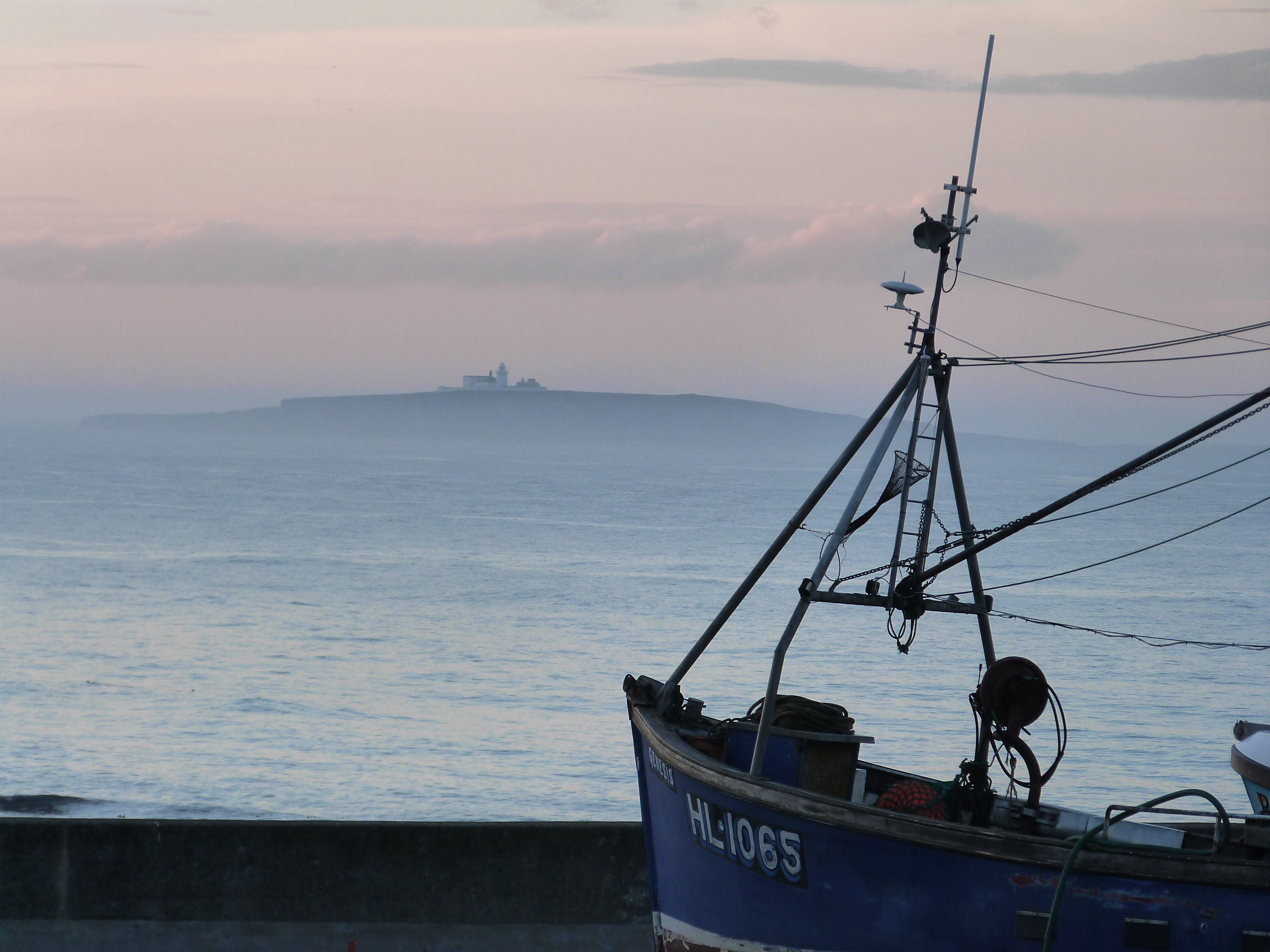 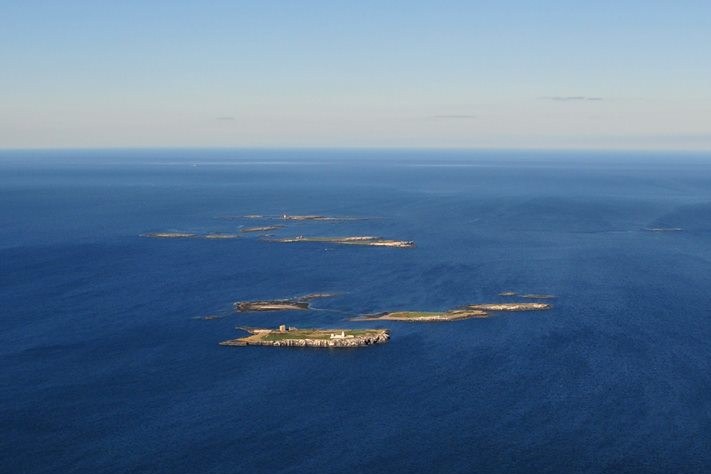 The stars of the show during the summer are obviously the Puffins. These charismatic little clowns are beloved by visitors. June is the best time to see them, with over 40,000 pairs breeding in a honeycomb of burrows under the meadows of Sea Campion. At this time of year they’ve abandoned the islands and returned to spend the winter at sea. We still might have spotted a few flying by on our trip though, although they would have looked a lot less exciting. Puffins lose their big colourful bills outside the breeding season. It would be silly to lug such a heavy and conspicuous thing around the North Sea all winter after all. 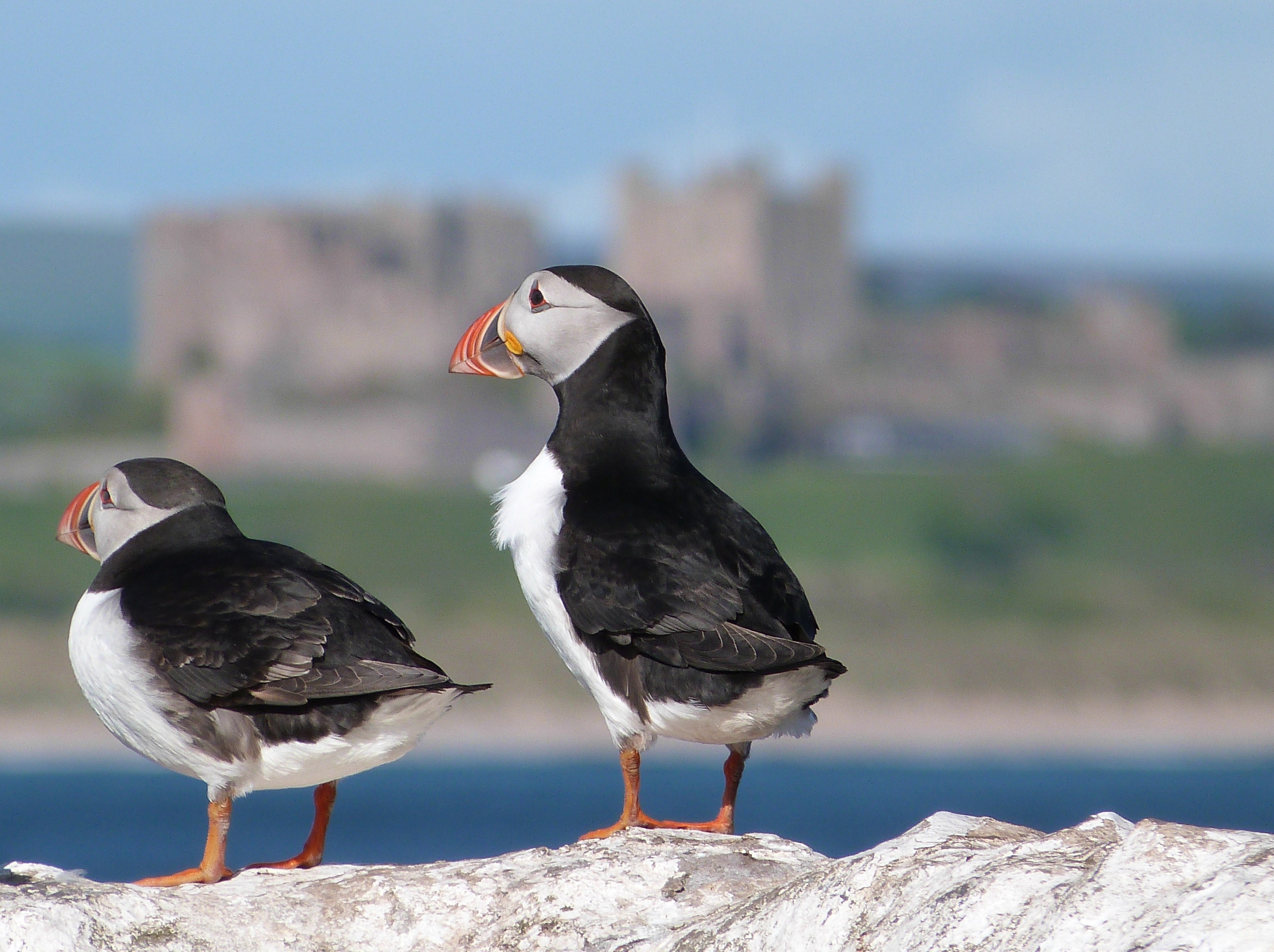 For those lucky enough to live and work on the islands, it can be a relief when the Puffins disperse. When the young pufflings (yes, they really are called that) first emerge from their burrows, it’s easy for them to get disoriented and find their way into the buildings. The team on the Isle of May have found pufflings in their kitchen cupboards, and I once found one sheltering underneath a U-bend in the toilets on the Farnes. It’s not just Puffins that find their way into the buildings either, in my time I had to shoo a Grey Seal out of the chapel and rescue an Arctic Tern from a, thankfully disused, log burner where it had fallen down the chimney.

While we would have been very lucky to have seen Puffins on our trip, there would have been plenty of other wildlife to see. If the weather was good there would have been thousands of Guillemots jostling for space on the cliffs. They disappear off to sea after the breeding season but return to the islands periodically over the winter. While they aren’t as colourful as their Puffin cousins, Guillemots are still amazing birds. They’re incredibly strong swimmers, and can reach depths of up to 180m. 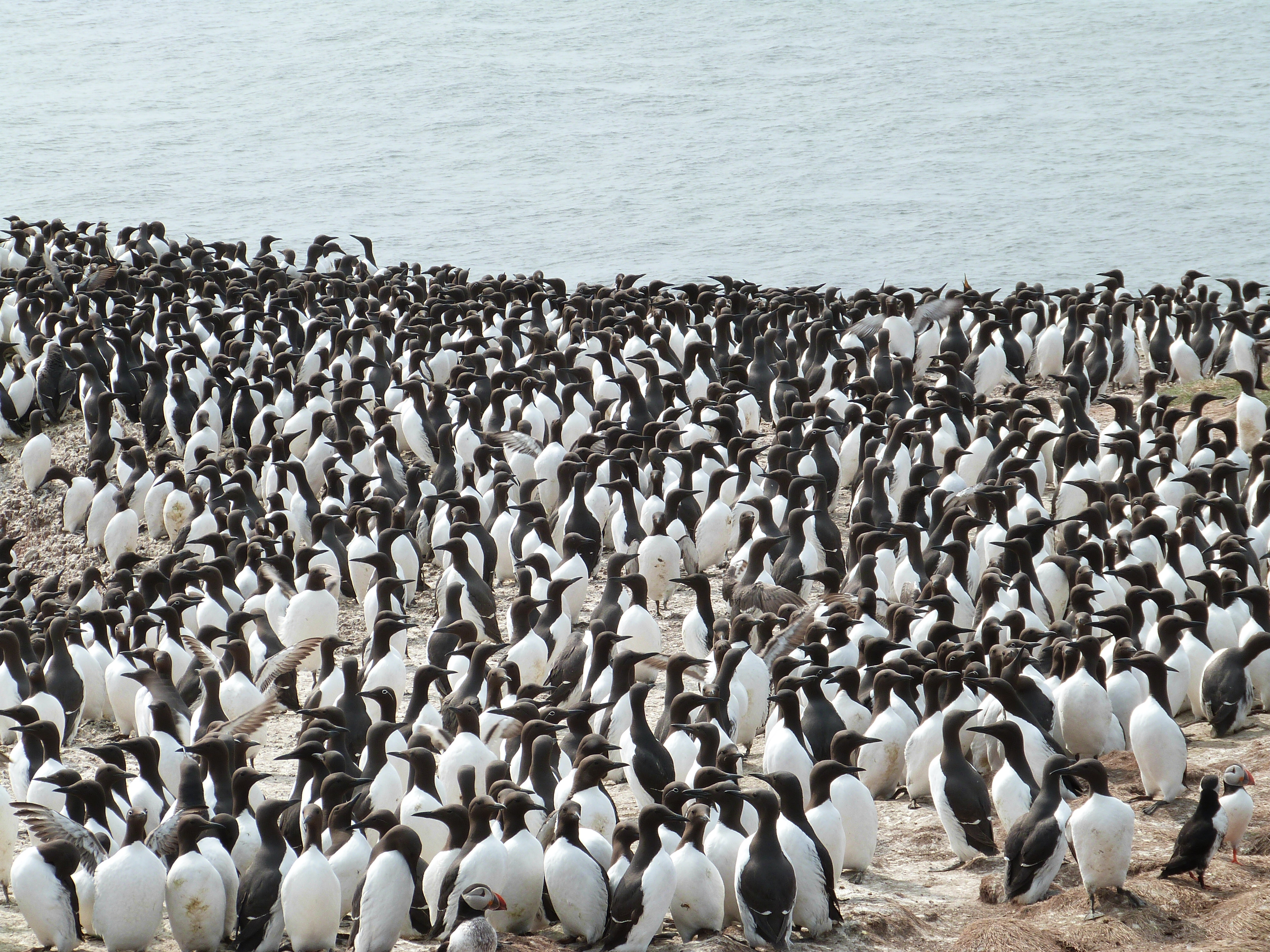 We would also have spotted Fulmars, one of my absolute favourites. Our answer to the enigmatic albatross, you might mistake a Fulmar for a gull at first. Look a little closer though and their subtle grey colourings, smoky eyes and expert gliding skills set them apart. On land they’re laughably clumsy but at sea they’re perfectly adapted; soaring on updrafts from the waves rather than wasting precious energy on flapping. The only ugly thing about them is their bill. Albatrosses and Fulmars are both ‘tubenoses’ so have odd looking protrusions where our nose would be. It allows them to get rid of excess salt, a perfect adaptation for a life at sea. 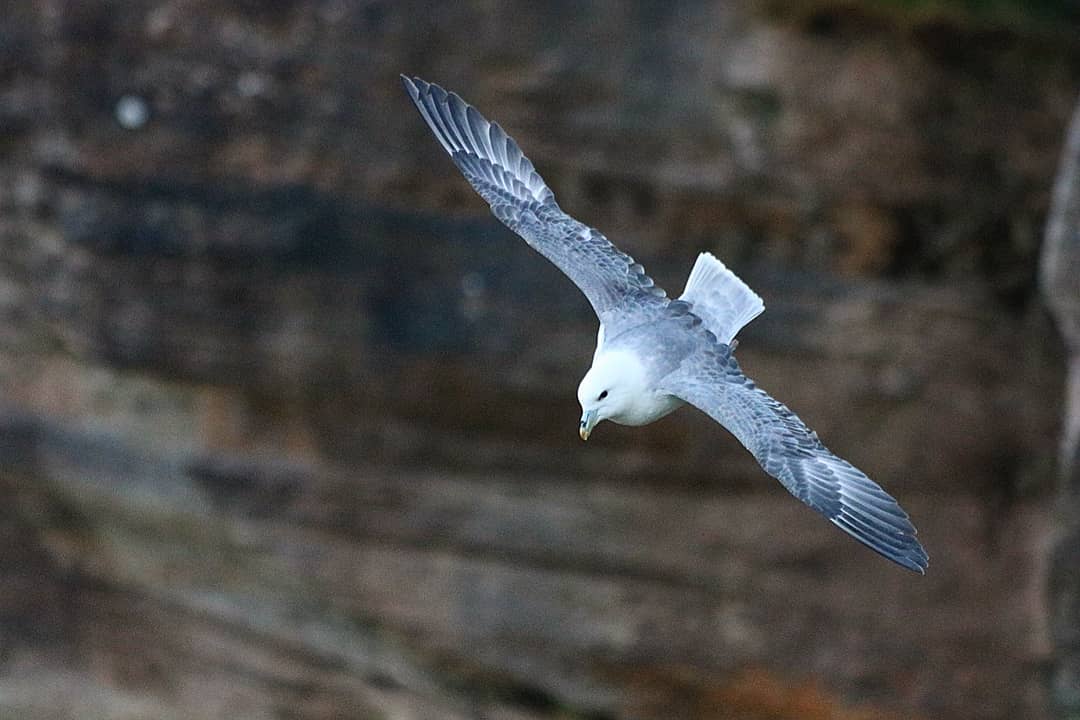 At this time of year though, the main attraction on the Farne Islands is the thousands of Atlantic Grey Seals who haul out each autumn to give birth to their adorably fluffy pups. They’re amazing mothers, foregoing food for three whole weeks to stick close to their pup, protecting it from predators and the boisterous males and providing regular feeds of super rich milk. They aren’t afraid to let the rangers know if they get a little too close for comfort either, which can make life interesting once pups and their mothers cover the paths and surround the accommodation later in the season. The first pups were spotted last Monday, so we would have had a fun time picking them out from the masses hauled out on the beaches. 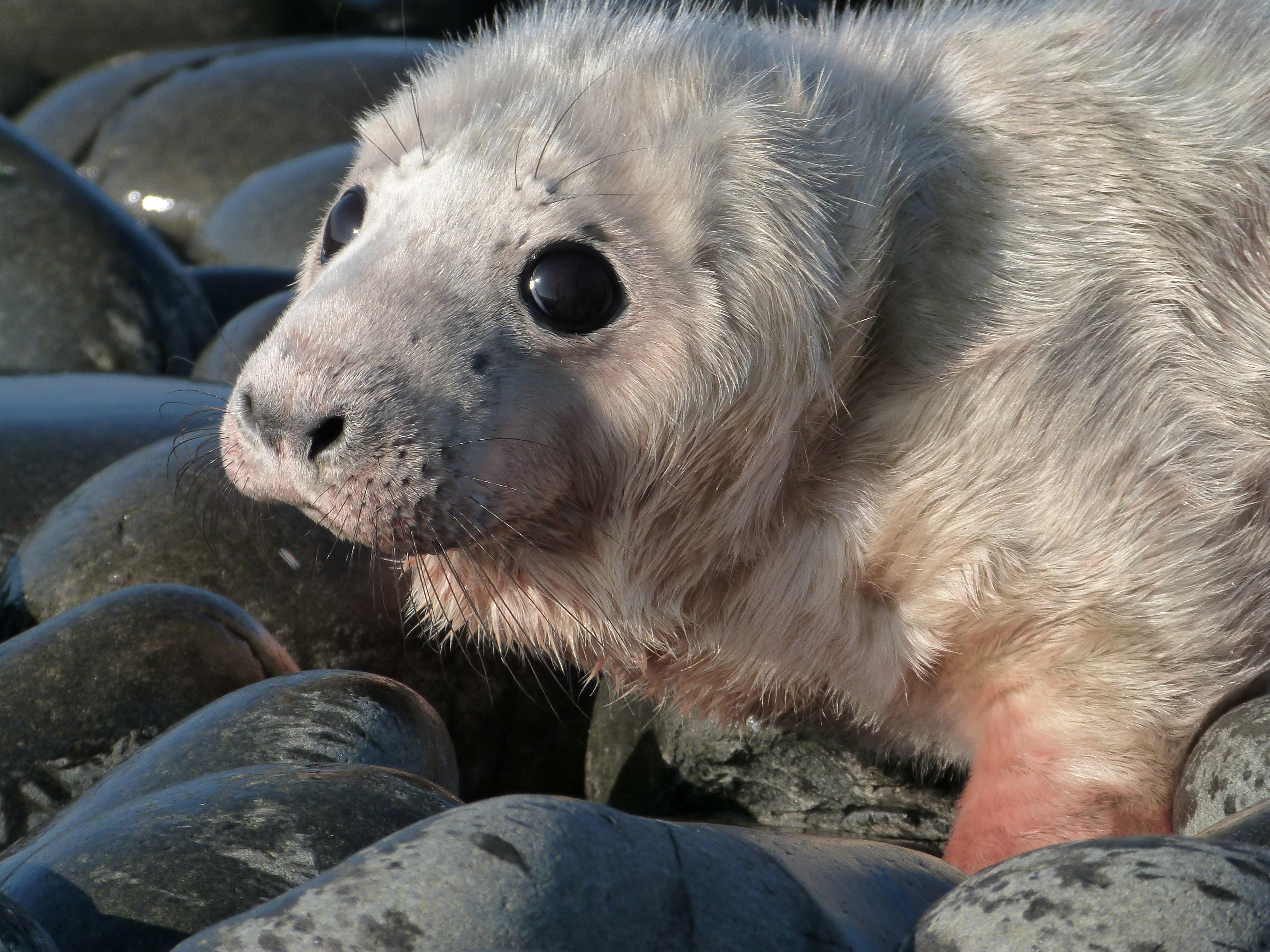 It’s not just wildlife that draws visitors to the islands; they also have a rich and fascinating history. St Cuthbert made the island his home in the 6th century and played an important role in bringing Christianity to England. Grace Darling is another famous inhabitant of the islands. This young maritime heroine braved a storm with her father on the morning of September 7th 1838 to rescue the nine survivors of a wrecked ship, the Forfarshire, which had hit the Big Harcar rock during the night. The boat trip would have taken us to the exact spot, but in its absence the Grace Darling Museum in Bamburgh tells the story wonderfully. Take a virtual tour here.

Thank you so much to all of our volunteers, especially all of you who regularly donate your time to helping Northumbrian wildlife with us. We really wish we could have celebrated Coast Care’s achievements with you, as it’s your commitment that makes it all possible. Hopefully we’ll be able to get together safely before too long!